A DIY Compost for FREE (or almost)!

I published this post on May 15th, 2013. Five years later it is still relevant and the exact procedure I use to this day. Have a read and inspire yourself to end the days of adding unnecessarily to the endless waste we produce as humans and turning that waste into something useful with very little effort!

Composting has become quite popular- en vogue if you will, kinda like having the urban chicken coop. Some folks I know have been doing it for as long as I can remember, hardly trendy- just plain smart, eco-friendly and easy. My parents (both sets of them) have fabulous composting systems that feed their prolific gardens year after year. Many of my friends now also have their own systems, some of which are simply acting as decomposition for natural waste (rather than sending it to a landfill), not necessarily for going back into food production.

Some have been hand-fashioned out of wood and chicken wire or old up-cycled city trash bins with the bottoms cut off. Some are some fancy versions available at hardware stores and on-line. Our friends in faraway lands such as Thailand and Peru just prefer to dig a big hole in the backyard, dump all the stuff in and forget about it.

Oddly this rustic method seems to work pretty well but would never be recommended here in the US as we seems to like to do things more detailed, more complicated and more expensive. Until moving to Miami I only had my own compost in Thailand and Peru where I could get away with such things as just chucking stuff out my kitchen window into a pile of dead leaves.

But here in Miami I have been forced to have an actual “mechanism”, and they can be a bit pricey. After much research on the internet and shopping on Craigslist for an old one no longer needed, I decided that just because I was in The States didn’t mean that I needed the fancy version…so I made my own! 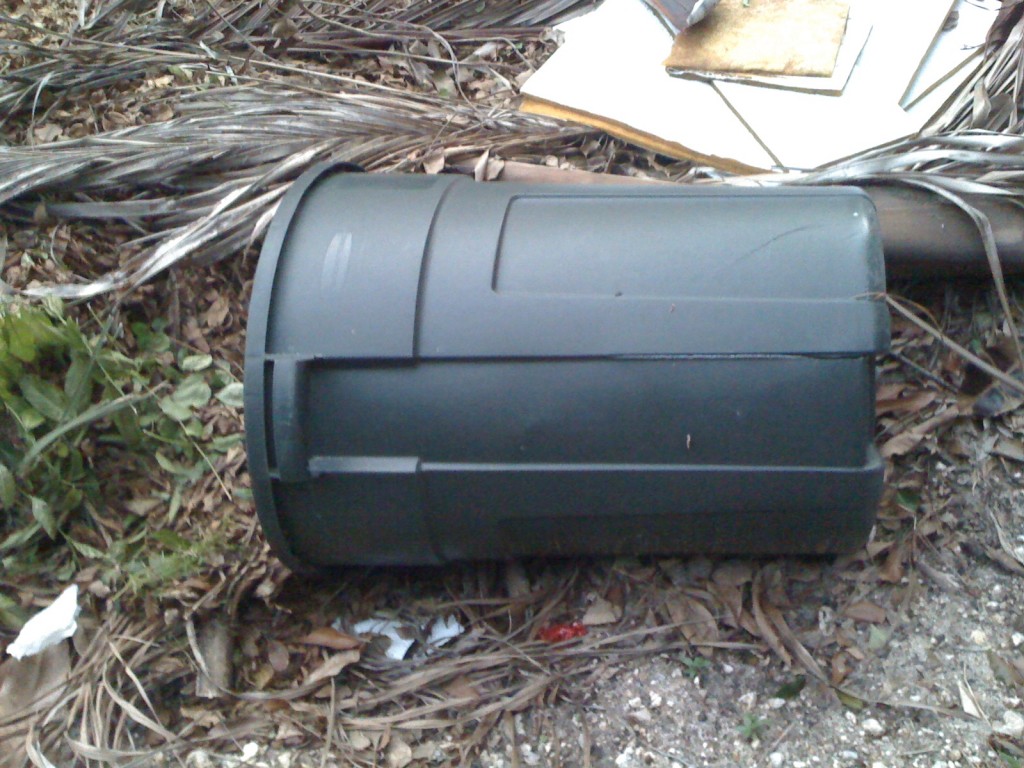 Every Friday in my neighborhood they come and pick up household waste such as boxes, palm tree clippings, dressers and anything else that people do not want and are too lazy to take to the Goodwill. In all fairness however THIS particular trash can I found was cracked on two sides and was clearly more suited for the dump than the Goodwill- or for my new compost bin! 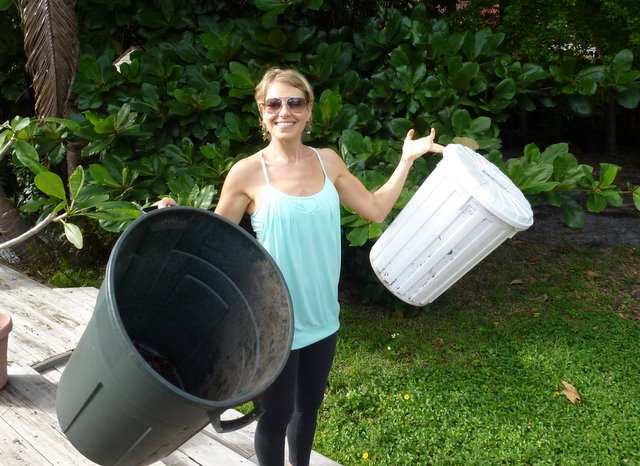 I pulled this little white one out of another pile down the road, still not sure what it will become but it looked useful for some outdoor project. 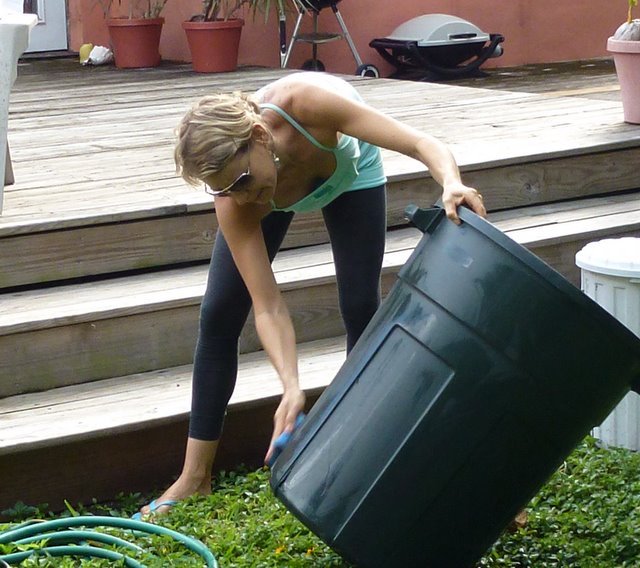 I scrubbed the inside and out… 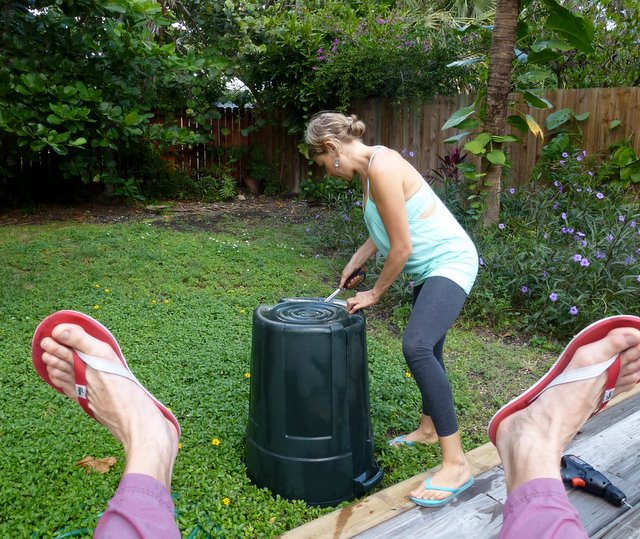 And then under the strict supervision of Anthony- I set to work cutting out the bottom so that it can sit directly in the dirt and the worms easily can come up through to do their work.     P.S. this is how many of the household projects look, but at least I am supervised! 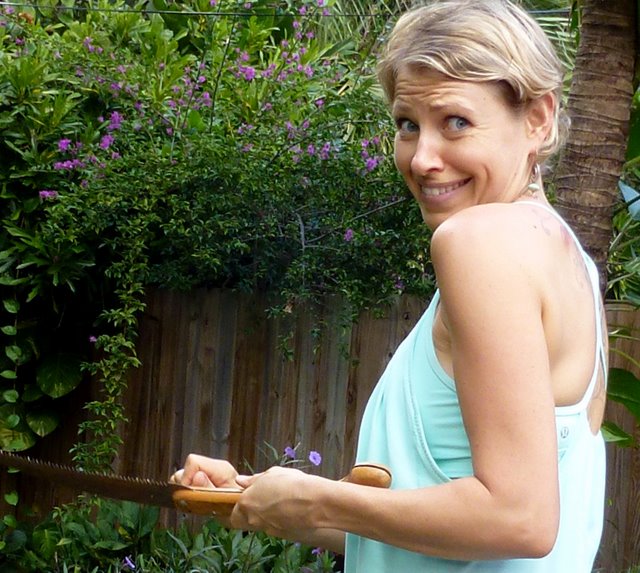 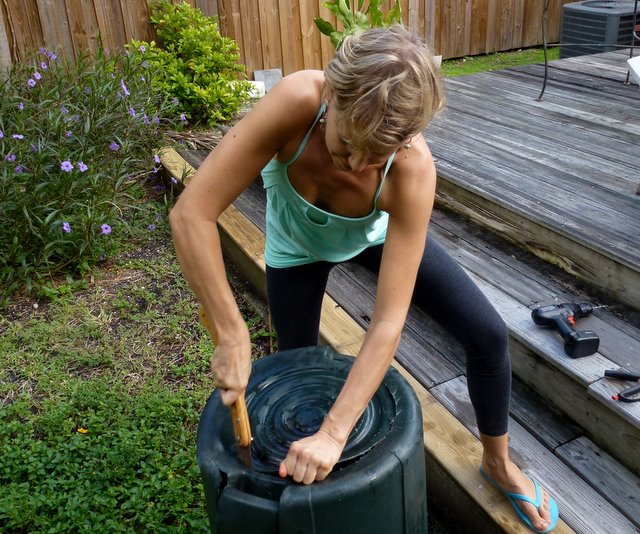 But it worked like a charm and I had the bottom out in no time! 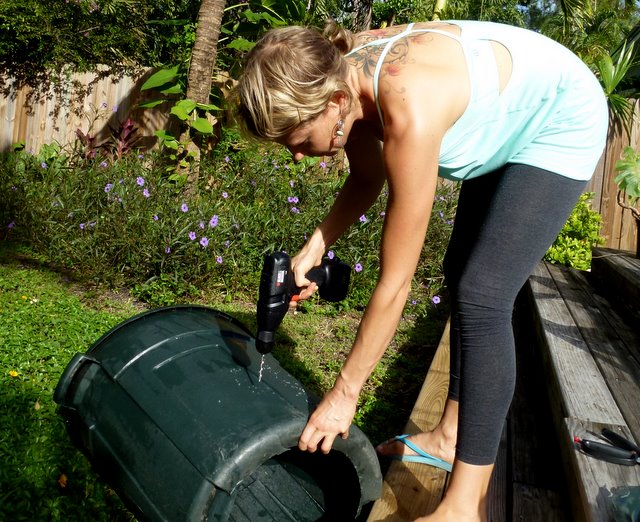 I then took a cordless drill and made holes all the way around it from about 2 inches from the bottom to about one foot from the top in long rows two inches apart. I think the drill bit could have been a bit larger but I made do with what I had, perhaps something more the size of a dime would have been good. 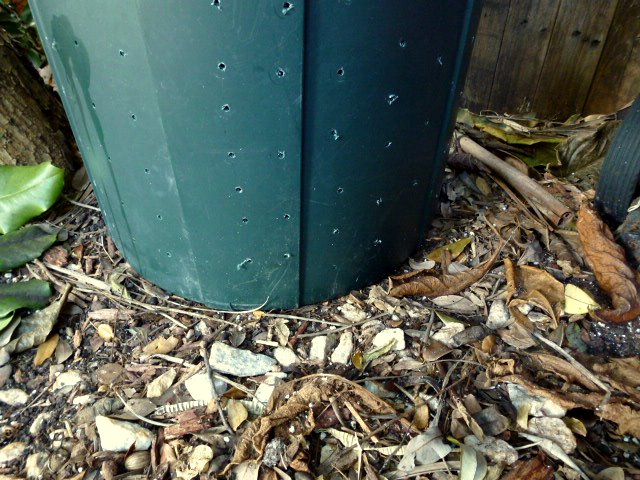 I then picked a shady spot and cleared away some of the dry matter on the ground and set the trash can right in the dirt. The absence of the bottom will allow the worms to enter and begin to decompose the waste into beautiful “black gold” that will feed any plant, vegetable or otherwise. 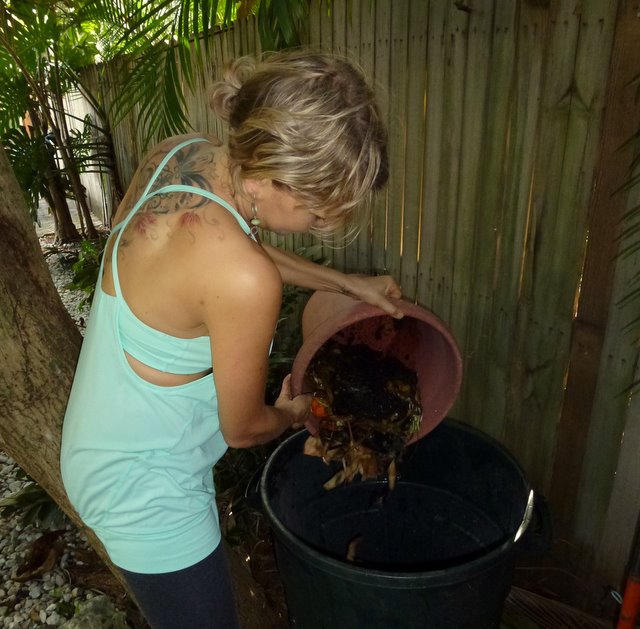 I had started a makeshift compost in a small plastic pot a few days before I found my larger bin and I added a little water and dumped the matter in. 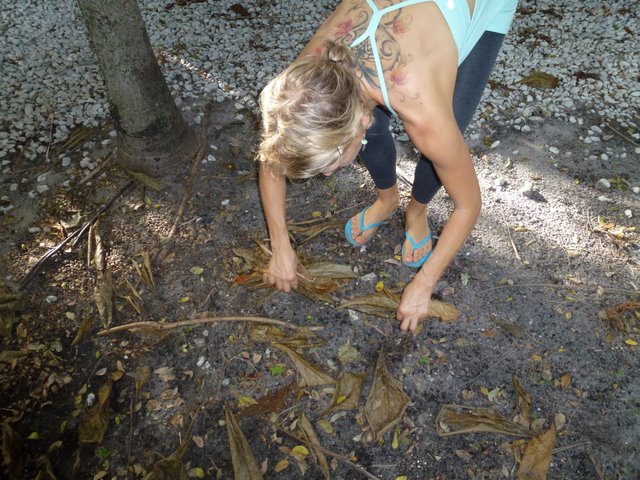 I gathered dry leaves and such from around the yard to add. It is important to have a mixture of “green” and “brown” or “wet” and “dry” to balance the nitrogen and the carbon. This is a really good way to get rid of extra leaves, cardboard, dryer lint etc. 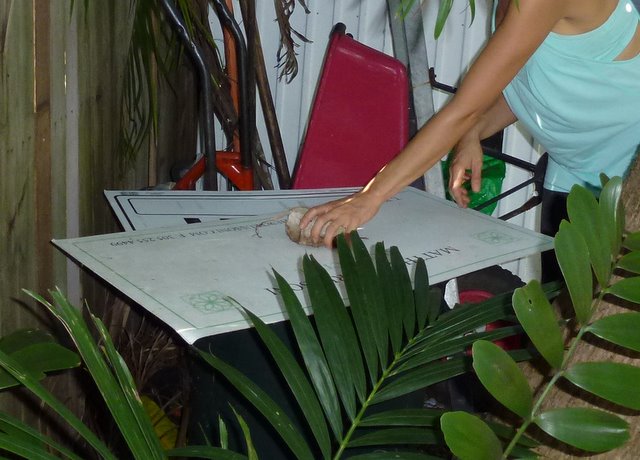 I then covered the bin with some stuff I found in our shed to keep out the rain until I can find a top that will fit…and voila, we now have a compost! And P.S. it was FREE!!! 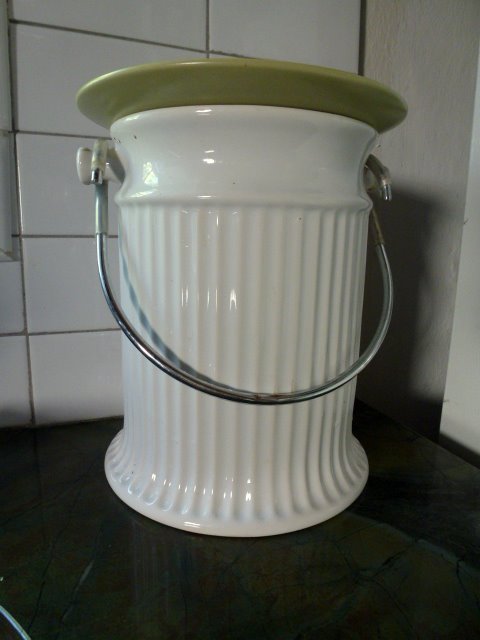 This is a counter top compost that I rescued from the impending Goodwill pile at my mom’s place. There is no lid (are we seeing a pattern here?) so I am using a small plate for the timebeing until I decide to spend the money on a new one, if I even need to.

We went a whole year of dumping organic veggie and fruit scraps from not only our household eating but form cooking classes and caterings…enough to fill my whole kitchen floor to ceiling no doubt. I never emptied it once and by the time I got around to using the “gold” there was only about enough to fill a kitchen size garbage can. The mountain of waste that had decomposed into that little bit was astounding. Not to mention the volunteer tomatoes and squash that popped up from the seeds chucked into the compost.

The moral of the story is that you can have a compost, without spending a ton of money, with VERY little maintenance and even if you do not use the beautiful and potent soil created for anything other than adding to your yard. Mother Earth and the landfills will thank you!

Slowly but surely we are moving into a sustainable future. The hopes are that we can do it gradually in the interest of preventing emergency status for resources and greenhouse emissions. Fortunately some cities like San Fransisco, Seattle, Nantucket have made it mandatory to compost and some cities are beginning to impose fines for putting recyclables into the trash. This may seem extreme but recycling and composting are such a simple things to do and they make such a difference. Tape a sheet of the accepted recyclables on your fridge, this will change slightly from place to place but it is easy to find on your city’s website. Check out this article from The Clean Air Counsel, pretty incredible. I am not at all trying to be preachy I just find this stuff so faciating and so important…and it is so easy to contribute to positive change. And just think of all the cash you will save on plastice garbage bags if you recycle and compost. Not to mention how many karma points you will sore for when you really need em like when you want to buy the imported wine and cheese that traveled thousands of miles to reach your palate…worth it huh? 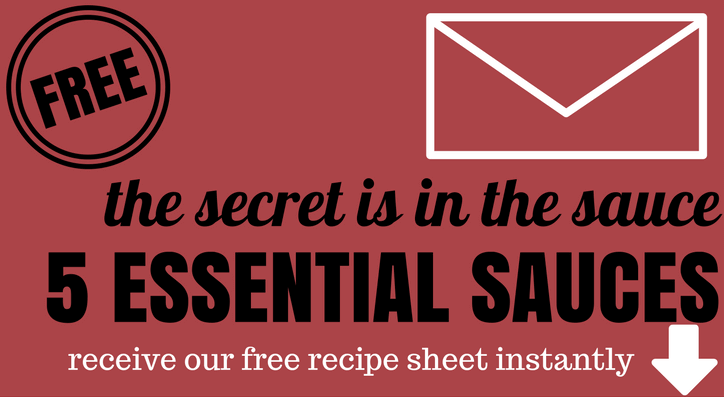